WE SEE THE SUPERSTARS

Well, hasn't it been a long time since this Blog had anything new on it. The last entry seemed to have been well received, at least by those of you who spoke to me about it. There were some demurrers at the narrowness of my definitions of the dance, especially about the validity of group choreography but at least (I hope) I got you thinking This piece is being written on an Amtrak train between Boston and New York so no prolonged meditations. Trains are a guaranteed soporific for me, all that lovely rumbling and rocking is like a cross between a loud giant cat and and probably a womb. Good soothing stuff.

So here's today's not quite news with plenty of opinion. Last weekend a buddy and I trooped out to Flushing for the Bellydance Superstars and Desert Roses "Sensuality in Motion" show. I wanted to see what the fuss was about so even though Queens College is a nasty schlep away (I used to teach out there: it took an hour and fifteen minutes on foot, subway, and bus at rush hour and about an hour and forty-five minutes off peak) we went.

We were not in a bad mood when we got there. A little spooked perhaps because of the ghost we saw on our way to the theater but for us pretty mellow. About the ghost: we both saw a person walking toward a doorway but when we looked again there was no one there. We were still mellow when we got to our seats although disappointed that there were no free program that simply listed the order of the dances. Programs were glossy affairs full of pictures and bios and the like that cost $1 each. We were mellow but not sure we were that enthusiastic.

Mellowness ended two minutes after the show started. You knew that was going to happen, didn't you? But read on, I'm not going to try to trash the evening. While I was having an instant problem with the music, synthesizer heavy, hyperactive and featureless my friend was aghast at the weakness of the choreography. The choreography, which was meant to introduce the dancers seemed to consist of much parading and many circlings punctuated by occasional isolations and large rotations a la Mona El Said--you know, the one where the head goes over so the hair brushes along the floor. Remember hair: much of the show seemed to be about hair. More hair than in a couple of years worth of Pantene commercials was constantly being tossed and twitched and dragged all over the place. It was distracting. We noted one woman in a tribal style costume who did remarkable, ravishingly defined isolations. Her we wanted to see again.

I'm going to boil this down for you. The technical level of dance by the Superstar soloists was astounding. I'm not a fan so I can't tell you who it was doing what. There was a double veil number that had to seen to be believed, it was so well done. Too bad the music behind it was howling awful and the light-show suggested the fires of hell. The drum solos performed with an engagingly affable drummer were precisely and even interestingly executed.

The ensemble work was, shall we say, questionable: unexceptional at best, amateurish at worst. Partly this was due to insipid choreography, partly it was due to the weakness of the back-up dancers. These younger women performed at a level equivalent to an intermediate class at a studio hafla. They had lots of hair, though. My buddy and I concluded that maybe they were there to make the soloists look even better. This was not needed.

Whatever. We left at intermission. We hadn't planned to go. We looked at each other and just left. We weren't even sure why. At the exit we met up with a fabulously accomplished dancer-choreographer who was leaving too. She didn't couldn't say why any better than we could, only that it was time to go. And we did. Afterward we were more puzzled than anything else. We'd seen some expert dancing performed by lovely, physically fit women but we were unsettled by it. Why?

Remember that ghost we'd seen on the way to the theater? Thinking back on the evening that specter now seems like omen and a symbol. We had seen the dance disembodied, cut off from its roots and natural context wandering and drifting in the empty air.
Posted by Stella at 11/27/2004 06:32:00 PM

You put it all into words so much better than I could
ever have done - I was beginning to think I was alone
in my reluctance to embrace the Superstars. Lovely
ladies, of course, but what happened to Oriental Dance
while I wasn't looking? I went to the show last year
and just didn't have it in me to go again when they
were in town last week. From what I hear, next year's
show will be even more "diverse".

And we had worked so hard to bring the dance out of
the carnival sideshow standing...

The state of our beloved dance is danger of becoming extinct due to rampant over kill by greedy so called promoters/misguided shows/ridiculous parasitic dance "fusion", just like in the late sixties by ignorant greedy club owners .The dancers are not so innocent by any means they want fame and fortune,even if it means killing the very soul of this dance.I am seeing so many versions of or better said poor imitations of the true spirit of performance art.It has become a contest as to who can gyrate/grind better,have the most over the top outfit,the biggest web page and shameless self promotion.Thank you Stella for your willingness to tell it like it is. 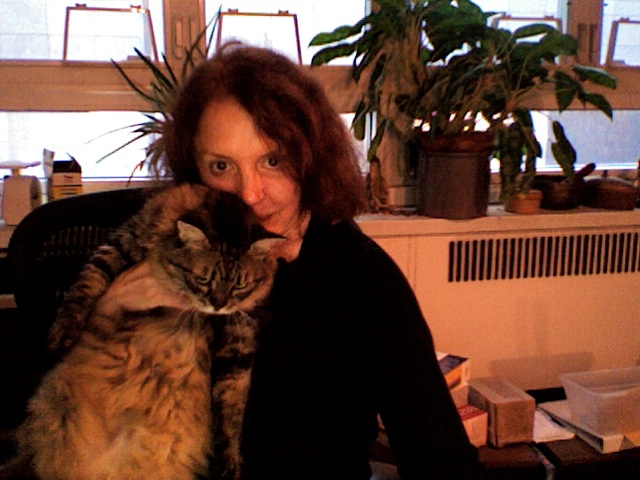 Me and my editor at work